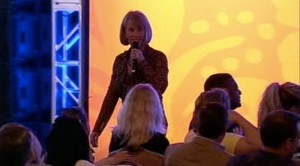 event– that even for an old seasoned pro like myself–makes me so glad I do what I do. First of all, Colorado Springs is one of my all-time favorite places, especially when it gets me away from the 100 degree heat of Dallas. The event audience was mostly guys who sell to small, family-owned businesses. One of the topics I was asked to touch on was….social media!

So I started by telling my story “Texting Harry” which is also the title of one of my books. It’s a story about one person’s willingness to re-think options, re-assess the desire to learn new things and re-evaluate how to fit into a future where change happens at the click of a mouse. In Harry’s case, texting and social media were just two examples of the many changes he was resisting.

I asked the audience how many understood and used text messaging to communicate–only half the audience raised their hands. But one guy stood out from the crowd–as he crossed his arms and shook his head from side to side. I approached him and asked “So what do you think about learning to text?” His answer was immediate, “No way.” “Why”, I asked. “Because I don’t need it and I don’t want it.” This is where my psychology comes in handy because I know that his answer probably meant “don’t know how and not sure I could figure it out”. I looked down at his nametag and said ,”Robert. See that young lady up in the front row? (a very cute young woman I had met earlier.) Well, what if, Robert, during your break she agreed to spend thirty minutes with you and show you how to text. And…if you are able to text me a message by the time break is over I will give you copies of all of my books as a gift plus an hour of free coaching? What do you say about that?”

Well,, he took a look at Jodi, then back to me, then to the pile of books sitting in front of him, grinned and said ,”Sure. Let’s give it a try”. The audience loved it! Guys who had known Robert for years left the room slowly, more anxious to see Robert learning to text than to go grab a cup of coffee during their break. Some even stayed in the room at the back, not wanting to miss the show.

I watched Robert. At first he was a bit nervous, then he started asking Jodi questions, then he took the phone in his hands and listened to her directions, and then…he texted me. It said: “Connie, this is Robert. And this is my first text!” When the group got back in, Robert came up front and as I read his text, his friends cheered him on. Then I noticed the coolest thing…..Robert had the biggest smile on his face. “So tell everyone, Robert, what learning to text was like.” Smiling, he said with pride, “At first it was hard, but you know guys–this is easy. You should try it. I’m so glad I did it.”

You and I both know, this really isn’t about learning to text. It’s about learning anything that’s new or different or scary or out of our comfort zone. The cool part is that the pleasure of achieving something new is so darn much fun. And it certainly beats the stress of being out of the loop and feeling left behind. What do you need to learn that you’ve been putting off? And what’s stopping you from moving ahead? Think of both Robert and Harry–when we stop learning we stop growing–and no of us can afford to have that happen.

Connie Podesta is a game-changing, idea-generating ball of fire whose rare blend of humor, substance, style and personality have made her one of the most memorable, in-demand speakers in the world today. 25 years.Two million people. 1000 organizations. Hall of Fame speaker. Award-winning author. Seven books. Former Radio/TV personality. Comedienne. Human Relations Expert. Therapist for 30 years. Topics on sales, leadership, change, life balance and success. And (what we all probably could use now and then)…a Comedienne. To learn more about Connie and what she can do for your team visit her site www.conniepodesta.com or find her on Facebook at www.facebook.com/Connie.Speaks -- she’s fun to follow!