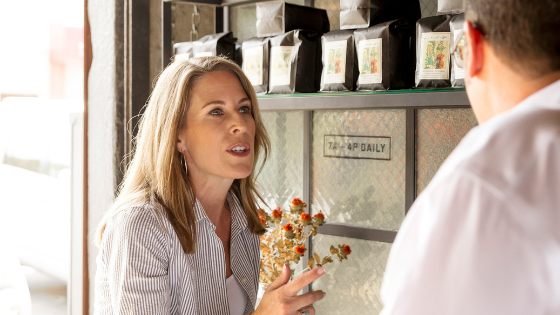 Raise your hand if you’re a “talker”. I know I’ve been guilty of it. I remember as a kid, a teacher saying to me that I wouldn’t amount to much because I talked too much! Fortunately for me, I grew up to be a keynote speaker, so I learned to leverage that particular skill!

As a former therapist and human relationship expert, I’ve also learned a whole lot since those school days about what connects us and what divides us as human beings. As leaders, spouses, partners, parents, friends – all of those roles require communication skills. In fact, in today’s world of cell phones, texts, social media posts, and emails – we actually need to be BETTER at it than we’ve ever been before because so much can get lost in the translation (or lack thereof).

Bottom line? There’s a time for talking and a time for listening. When we jump in too soon in a conversation before we’ve really heard what the other person’s real message is, we miss a LOT.

I like to use a conversation with my kid when she was younger as an example. There was a time when she was a teen that she came to me to tell me that a friend of hers had been to a party and had too much to drink. I had a choice then to jump in and start talking as many parents do, with the standard, “Let me tell you something, young lady, if I ever catch you…” response.

Ever been there? Had I taken that choice, guess what? I would have effectively shut down that conversation and sent a clear message to my kid that I had just stopped listening.

The better response? To say, “Hmmmm….” That’s it. And let her continue to wade into the conversation. Because I did, I was fortunate enough to move to the next level of what she really wanted to know and that was, “If I’m in trouble, is it safe to call you?”

Take that same context and think of it in your role as a leader.  If a team member came up to you with a concern, question, or problem and instead of letting the conversation play out, you jumped into “boss mode” and started lecturing, what vital piece of information could you miss? What message are you sending to that employee?

Want a stronger team? Better partnership? Closer relationship with your kids? Listen, really listen – way more than you talk. That old adage that we’re given two ears and one mouth in that proportion for a reason is spot on. People need to feel seen, heard, and safe in order to communicate as honestly and effectively as possible.

Watch this to learn more…

If you’ve got a team who could benefit from strong, timely communication skills with a serious psychology spin to help them listen more, connect on a stronger level, and develop better client, customer, and colleague relationships – give me a call. I’ve got just the topic for your next event.

You might also want to check out my series The Top 10 Things You Need to Quit to Be a Better Communicator on YouTube.