A Lesson in Generations 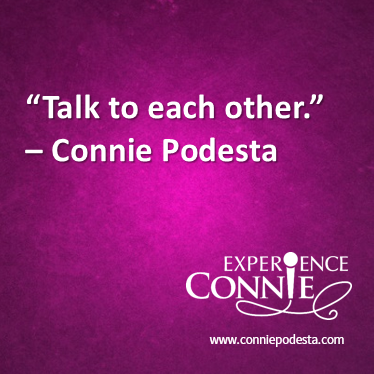 Here’s the deal.  The Baby Boomers are known for being hard workers, nose-to-the-grindstone people.  They grew up believing if they worked hard enough they would get what they wanted.  They’d achieve a level of success that they aspired to.  And that’s all good stuff.  However, when I polled young people and asked them to describe their parents in just two words here’s what I got:  Tired and Angry.  I asked them to describe their bosses in the same way and guess what?  I got the same two words:  Tired and Angry.  And here’s why – most of them grew up with at least one workaholic parent.  Parents, that while most were well meaning, put everything into that ‘work hard=get what they want’ philosophy.  But many of them didn’t get it all-did they?  It would be different if they were fulfilled and happy, but many of them overworked, over achieved and they were left – well – tired and angry.

So to younger generations, the idea of working THAT hard didn’t equate to having it all.  In fact, quite the opposite.  So you see many young people who strive to be more balanced.  Have more accessibility.  Be at their kids’ soccer games, plays, and productions.  They don’t want their kids to think of them as tired and angry all the time.  But the flip side is that what they do want – they tend to want NOW.  It’s hard for many of them to realize they need to put in their time and pay their dues – something that was inherently drilled into the older generations.

So where’s the bridge? I tell my audience members and leadership clients to start with four simple words:  Talk to each other.  We’ve so much to learn from each other.  SO MUCH.  And it starts with communication.  Both sides can ask – what do YOU want?  What do YOU expect from this position?  How can we work TOGETHER to make it a win-win for both of us and the organization?  It all starts with conversations.  Open mindedness.  And a willingness to put aside some age-old (and age-young) stereotypes and connect with each other in new ways.

Our world is changing at a lightning pace.  The only way to keep up, move ahead, and make the most of it?  Is by working TOGETHER.

Here’s the clip from the interview – enjoy!

Want to learn more about bridging the gap?  Check out my book Texting Harry. It’s a great story – with an awesome spin on how communication makes ALL the difference in connecting generations.